The Central Council set up this independent review in order to examine its activities and make recommendations for modernisation in the light of the current needs of the ringing community.

We have undertaken the review using Council Decision K as a starting point. This was adopted at the Portsmouth meeting in 2016 and clarified the Council’s relationship with ringers, churches and other ringing service providers stating clearly that the primary role of the Council was the provision of support and services to ringers and to ringing.

We developed and then consulted upon Vision and Mission statements that sought to describe a view of what a good future for ringing would be like and what the role of a reformed Central Council should be in making that happen. Additionally, we invited general submissions from ringers giving their views on the Council including ideas for improvement and undertook a survey to see whether the views expressed were representative of those of a larger group of ringers. On the basis of this evidence, together with our own observations, we have identified a number of positive and negative themes in relation to the Council. We have further analysed these to identify underlying causes and propose changes that should address them.

This is a short summary of our findings together with our detailed proposals. PDF versions of our summary & full report can be downloaded below: 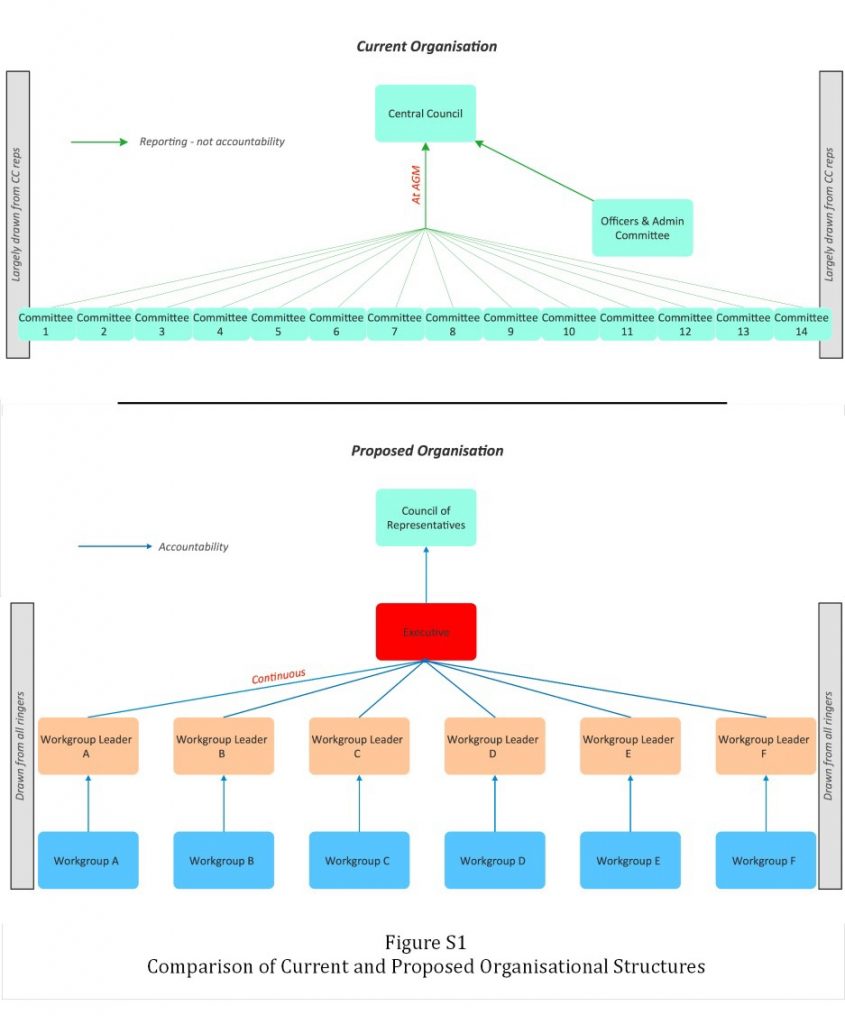 The new Executive will, by November 2017, realign the current committees into a significantly reduced number (single figures) of Workgroups, each led by an individual Workgroup Leader.

i) Workgroup Leaders will be appointed by the Executive by February 2018. One criterion for appointment will be that they are considered to have credibility within the Workgroup’s field of activity.

ii) Each Workgroup Leader will report to a named member of the Executive who will be ultimately accountable for that Workgroup’s performance.

iii) Any ringer may apply to be a Workgroup Leader.

iv) Workgroup Leaders will, in consultation with the Executive, appoint members for their Workgroups in such number and variety as needed, with selection being irrespective of a candidate’s membership of the Council of Representatives or Executive. This work will be completed by May 2018.

v) The continuing need for each of these Workgroups or for new working (including “task and finish”) groups will be reviewed regularly by the Executive.

vi) All Workgroup posts will have a term of office of three years renewable no more than once (except that some initial appointments may be for shorter terms to ensure that not all members of a Workgroup, or all Workgroup Leaders retire at once).

The current Council will from its meeting in 2018 be retitled the Council of Representatives (CoRe) and its functions restricted to matters related to the constitution of the CRO, the review and approval of the annual report and accounts, the election of members of the Executive and approval of any changes to the rules of the Council. It will not be involved in operations or in making operational (including technical) decisions but may act as a conduit for feedback from members and from affiliated societies as well as a source of advice to the Executive.

ii) CoRe will consist of Representative members only and the category of Additional Members will be discontinued. Existing Life Members will be conferred the title of “Fellows of Council” but will not have voting rights within CoRe.

iii) The Executive should develop proposals by which the formal business meeting of CoRe will be made significantly shorter and more effective. These proposals should explicitly consider the feasibility of reducing the size of CoRe to 25-40% of its current size with each society retaining representation. It will consult on these proposals with affiliated societies with a view to implementation before the election of representatives to take up office in 2020.

i) Develop plans to allow membership of the CRO to be opened up to all ringers, begin implementing these and report on progress to CoRe in May 2018.

ii) Work with affiliated societies and others to develop direct communication links with individual ringers during 2017-18.

iii) Every three years commencing May 2019, undertake a review of the CRO’s rules and governance to assess whether they continue to be effective and aligned with best practice. In the event that control of the CRO remains vested in the CoRe, each review should explicitly include an assessment and recommendation as to whether it would be appropriate to transfer some or all of the powers of the CoRe to individual direct members.

The Executive will recruit a small group whose task will be to simplify the rules of the Council, replacing them with a short statutory set of rules supported by a set of operating principles and procedures. All of the necessary rule changes required by the foregoing proposals will be incorporated into this work. The new rules and supporting documents together with any other outputs of this group should be compliant with Charity Commission guidance. The Executive will report back to CoRe in May 2018 with a recommendation for adoption at that meeting.

i) The Council agrees that the Executive should, where necessary, seek and be prepared to pay for professional support particularly in communications, public relations, the marketing of ringing and those aspects of ICT necessary to allow the smooth and professional operation of the CRO.

ii) The new Executive will scope out the creation of a professional support group to carry out the administrative functions of the CRO and some of the support work currently performed by committees and report back to CoRe with their conclusions in May 2018.

The Decisions of the Central Council will be replaced with a simple and permissive descriptive framework for ringing with only the minimal detail required to maintain the historical record. The Executive will appoint a neutral and respected ringer who is demonstrably independent of those responsible for the current Decisions to complete this work. The leader may assemble a group of ringers to assist with this task and will consult widely on their proposals before presenting them to the Council in May 2018.

The publication and maintenance of this framework will be the responsibility of the Executive.

i) Review the name and branding of the Council taking into account a broad range of opinion from the public, ringers in general and other interested parties and then bring forward to CoRe recommendations for any change to the name of the Council, or any alternative working name, that it may have.

ii) Consider how the annual meeting of CoRe may be incorporated into an annual ringing festival which will be open to all ringers and plan future meetings accordingly.

iii) Consider what benefit remains from continuing to work to the current triennial cycle of business.