We wanted ringers to mark the 300th anniversary of the landmark peal at Norwich in 1715 (the first recorded, though no one can be sure that it was the first ever rung). It was an opportunity for lots of celebratory ringing and we hoped that it could generate publicity where ringing itself would be the story, not just part of the chorus as it was for the Jubilee, Olympics, etc.

While we were discussing a logo to help with publicity Rosalind Martin had the brilliant idea of extending the project to get 300 ringers through their first peal in 2015. During that conversation neither of us knew how big a challenge that would be, but when I looked up the average number of firsts in recent years I found it was around 160. We were confident that ringers would rise to the challenge, but even so, at the back of our minds was the thought that a year on we might be writing a story of ‘tremendous achievement even though we didn’t meet the target’.

Watching the progress month by month it soon became clear that ringers were doing much better than in an average year, but the target still looked elusive. A few times the curve almost reached the target line but then fell back again. The final surge began in October and the curve crossed the target line at the end of the month. It passed 300 at the end of November and kept going up to hit a year end total of 387, nearly 30% above the target – a splendid achievement.

Overview of the year

The approximate split of first peals by stage was: Doubles & Minor around 30% each, Triples &Major just under 20% each. There were just a few Caters, Royal and Maximus (but no Cinques), and one Minimus. Seven of the year’s firsts were in hand.

How old were those who range their first peal?. Most of the peal reports didn’t mention age but those whose ages are known are three senior (Richard Coley 79, Michael Jenkins 68 and Trevor Vercoe 65) – and twelve teenagers. 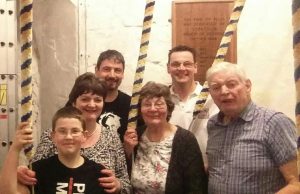 Ben Curwen was the youngest overall. He started ringing in May 2014 aged 10, rang his first quarter a couple of days before his 11th birthday in February and rang his first peal on 27 December at Sandon, Staffs, with the rest of the band being his mother, uncles and grandparents. Early peals run in the family. His mother rang her first aged 11 and one of his uncles aged 9. After the peal Ben said: “I was looking forward to the peal but worried that it would be hard work and thought I would get lots of blisters – but I didn’t. During the peal I was counting my place and wondering how Mum and Nanny were doing – 18 years since Mum last rang a peal and nanny had ‘retired’ from peal ringing. I want to ring more peals … but not yet!. When Grandad called ‘that’s all’ I couldn’t stop grinning. I have watched all the ‘likes’ on FB”.

Before Christmas when Ben rang his peal,
it looked as if the youngest would be one of the three twelve year old firsts … 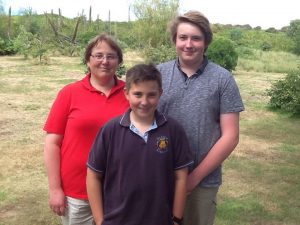 Daniel Page was the youngest (12y8m) at the time he rang his first peal on 7th August in Alderney – Plain Bob Minor in hand. It was another family peal, rung by three Pages and credited to the eponymous ‘Page 3 Society’. Daniel grew up in a house regularly used for handbell practices so it’s no surprise that his first peal (and first quarter, two years earlier) were in hand. His second peal (Yorkshire Surprise Major inside) was in the tower in October and his sixth (which included another first) was by an under 18 band of members of the ODG team that rang in the RWNYC. 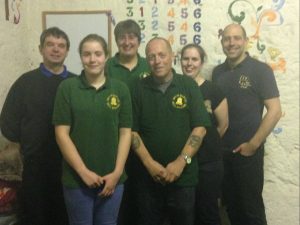 Madeleine Johnson was 12y5m when she rang her first peal on 15 November at Much Marcle – Treble to Doubles – overtaking Daniel as the youngest. Maddie’s peal was intended to be earlier in the year (when she was still 11) but was delayed by an injury to another member of the band. She says she has “plenty of plans for what she wants to ring in 2016 so look out for her name onBellboard“. She conducted her first quarter peal just before Christmas and she will be attempting another peal shortly. 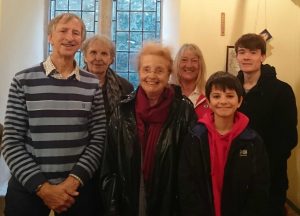 James Austin was the third twelve year old to ring his first peal, Treble to Doubles at Farnborough Kent, on 22nd December but he was older (12y9m) than the other two. Jamie said “I enjoyed the peal – it was great fun. I still can’t believe I got it. Nearing the end my legs started aching and I started to feel extremely tired, but I still made it. Right after it I sat on the floor. The whole experience was great and I can say I am one step ahead of my sister, aged 11 who had her first quarter on Monday 21st. I can also say that to my mum as she has yet to ring a peal. Though I think she might ring one to keep on top of me! Thank you to all that helped me before and during the peal.”

It doesn’t really matter since they all scored the same personal landmark within the year and they each contributed towards the total but it’s a natural question to ask. It’s not so easy to answer though. It had to be one of the twelve ringers who rang their first on 28 November, the day the total went from 295 to 307. But which of them was the 300th depended on when each of the five peals (all with multiple firsts) finished. The Wylie peal came round at 12.15 taking the total to 299 and the Throwley peal at 13.02 brought the total to 301, followed by Stokesley at 17.50 (303), Cottenham at 18.07 (305) and Llangollen at 19.36 (307). So joint 300 & 301 was shared by Rebecca Denne and Dianne Stewart at Throwley. If you really want to split hairs, Rebecca on the Treble struck her blow in the final round about a third of a second before Dianne who was ringing the second. The purists say that no one could claim to have rung a peal until the peal itself concluded with the Tenor striking a second or so later, so take your pick. (For the record, the answer I published the following week was invalidated when an overlooked peal rung in June came to light, moving everyone up two places.) 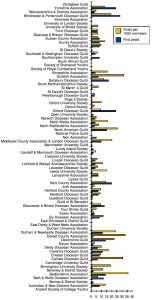 Assuming that most of the peals were credited to the ‘home’ society we can get an idea of the distribution of firsts by looking at the totals attributed to each society (blue bars in the diagram). Obviously bigger societies have an in-built advantage so the diagram also shows the number of firsts per thousand members (where known) as orange bars. On this measure some societies, including relatively small ones, have done extremely well. Four societies had more than 30 firsts per 1000 and four more had over 20. 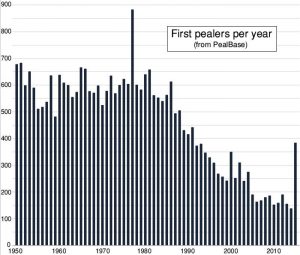 Achieving nearly two and a half times as many firsts as the recent average is a huge achievement and a credit to all those involved. The last time there were more first pealers in a year was 1991, but when 443 people rang their first peals in that year it was not a high point – it was half way down a long decline that began in the late 1970s and has continued ever since. In earlier decades there were consistently over 500 firsts every year, and often over 600.

Another long term change is the declining number of people ringing peals. It was around 4000 in 1950 and has gradually reduced to 3000 or fewer in recent years, which is hardly surprising with fewer and fewer new peal ringers. Even allowing for the reduced number of people ringing peals, the proportion of new peal ringers has also reduced. Until about 1980 first pealers accounted for one in every six or seven people who rang a peal but of late the figure has been nearer one in twenty. This is all consistent with the anecdotal view of peals being rung by fewer, older ringers.

In 2015 first pealers accounted for one in eight of those who rang a peal – almost but not quite back to how it was between 1950 and 1990. So if we can sustain this year’s achievement in coming years we should be able to replenish the peal ringing community before the old stagers finally tie up their ropes for good. We must not let 2015 be a one-off – it must become the new norm.

I noticed two other things when looking back at historic peal records – both positive. The number of first pealers who didn’t ring another one has reduced from about 40% in the 1950s to around 30% more recently, and the proportion of peal ringers conducting has slightly risen from 16% in the 1950s to around 19% in the last decade.

The Central Council would like to congratulate all those who became peal ringers during 2015, and wish them success and enjoyment in their future ringing careers. They can download a certificate to record their part in FirstPeal2015 from:    << PDF version >>   << MSWord version >>.

We hope that ringers who haven’t yet rung a peal will be inspired by the success during 2015 to go on and do so in future years. We recognise the key role played by all those who encouraged and supported 2015’s first pealers and we hope that they and others will continue to encourage more ringers to aspire to ring a peal, which for 300 years has been the ‘gold standard’ ringing performance.

John Harrison (on behalf of the Central Council PR Committee)