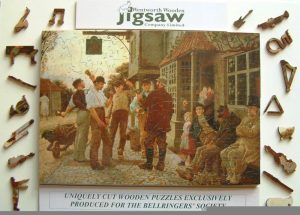 In late 2001 I tentatively ordered twenty copies of “The Ringers of Launcells” wooden jigsaw and I am delighted to report that 250 have been sold. The proceeds went into the Central Council Bell Restoration Fund and grants have already been awarded to assist a few bell restoration projects.

Bill Butler suggested that an old painting of tune ringing on handbells would be a suitable subject for a second puzzle and this has become a reality.

“The Bell-Ringers” was painted by Thomas Reynolds Lamont (1826-1898) and depicts five men in period costume entertaining four adults, a child and a baby outside an old public house. The picture is produced by courtesy of The Fine Art Society Ltd, London.

Lamont and his friends Thomas Armstrong, Sir Edward John Poynter and George du Maurier shared a studio in Paris and were known as the “Paris Gang” for their riotous bohemian student life. Du Maurier later used the gang in his famous novel “Trilby” – Lamont being the model for “The Laird”.

Lamont produced only a modest number of costume genre scenes and in about 1880 he ceased painting seriously and retired to live between St John’s Wood and his estates in Scotland. He only exhibited four pictures at the Royal Academy – The Bell-Ringers was shown there in 1880.

The Wentworth Wooden Jigsaw Company creates jigsaws for those who do the picture first and the edge at the end! It can take less time than a peal to complete, if you want to that is. There are 250 pieces measuring 250mm x 360mm (10″ x 14″) when complete, so it is unlikely to clutter your dining room table for long, although you might want to frame it when it is finished!

Wentworth has the ‘cutting edge’ in the jigsaw market place and uses lasers to make the intricate shapes. Yes, there are pieces with straight edges inside the puzzle and sixteen special ones such as: a conductor, triangle, kettle drum, guitar, violin, double bass, grand piano, harp, serpent, saxophone, trombone etc known as “whimsies” to add to the fun.

“Whimsies” were so-called because Victorian puzzles cutters included such shapes “on a whim” and Wentworths have revived this tradition.

“The Bell-Ringers” is a high quality product cut from Finnish birch ply and offers a pattern to challenge, intrigue, frustrate and confuse and also makes a splendid gift.