For our next dip into The Tower Handbook we will look at the art of “standing behind”. It comes in the middle of a short chapter on “Helping”, appropriately sandwiched between “Teaching” and “Learning”. There are answers to 13 questions. There is not space for them all, so here is a selection.

e. What should I say?

You are there to provide missing information or to help correct mistakes, so what you need to say depends on what has gone wrong and why. Sometimes, but by no means always, saying which bell to follow will be the most useful. But pointing is better since it is visual and less likely to disrupt place counting. If the problem is a missed dodge, saying so is most useful since the immediate priority is to correct the over shoot, and then to get back on the blue line. If the problem is caused by handling, eg “ploughing the leads” (failing to change speed after hunting down, and as a result going below first place) then the first priority is to say “hold up” (now) to compensate. The next would be to advise to “hold up the handstroke leads” (for future leads), and (if the problem persists) you could pre-emptively warn to “put the brakes on” when passing down through 2nds place.

g. How much should I say? 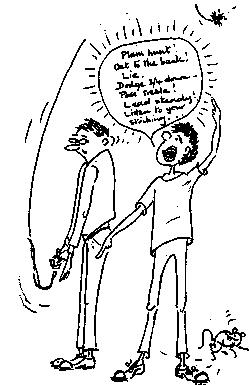 Knowing how much to say is one of the most difficult aspects of standing behind. It is tempting to say too much.

If you judge that information is needed to avoid further error or de-stabilisation then give it. Otherwise refrain. Especially resist the temptation to keep on pouring out information once you have started.

You may have to continue to give advice after a trip if the person you are helping ‘falls apart’. But try to wean him off your help as soon as possible to avoid creating dependence.

Of course sometimes you will say too much (we are all human) but if you are aware of the danger it should not happen very often.

h. When should I say it?

There is nothing worse than being told what to do when it is too late to do it. This is a common problem with minders and it causes a lot of trouble for the hapless ringers on the receiving end. Try to avoid this trap by thinking ahead. Some advice is less time critical than other. If the bell is too low, saying “higher” is likely to be good for a few blows, whereas saying which bell to follow becomes stale within half a blow. Of course explanatory information (like “you should have dodged there”) can help to reorient your protégé’s thinking, even after the event, whereas instructional information (like “hold up” or “dodge with Fred”) is positively damaging a blow late.

k. Are there times when I should hold back?

When standing with someone, be a safety net, not a crutch. Taking advice from you needs concentration and distracts from the aim of becoming self reliant. Let people correct their own errors if they can. Only jump in if you think uncorrected errors will lead to a mix up. Otherwise, bite your tongue. You may find this holding back takes more effort than ringing the bell!

Saying too much is the biggest danger for most of us. However, there are some occasions when the person you are standing with loses confidence and then you will need to give more active support. But try to back off again if you can when things have settled down. If panic sets in, you may have no choice but to talk him or her through it. But in such circumstances it is often better to catch the conductor’s eye and hope he will call the touch round.

Where can I get it?

The Tower Handbook is available from: Central Council Publications