Of all the events to ring for in 2012 the celebration of the Queen’s Diamond Jubilee will be the most historic. The nation will be celebrating her sixty year reign up and down the country during the year and particularly on the long Bank Holiday weekend of 2nd – 5th June. The only other monarch to have had such a long reign to date is Queen Victoria, who reigned for just over 63 years. 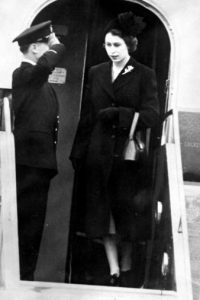 On Monday 6th February towers around the country and the Commonwealth rang to commemorate the Queen’s Accession to the Throne in 1952, after the death of her father King George VI.

During Jubilee year you may wish to ring a special method. There are a number of Diamond themed methods to choose from, such as: HMS Diamond Delight Minor , Diamond Bob Triples , Diamond Surprise Major and Jubilee Surprise Maximus . You may also wish to choose from a wider selection of methods and stages including such themes as Anniversary, Elizabeth II, Jubilee and Sixtieth

On Sunday 3rd June many events are being organised including the Thames Diamond Jubilee Pageant and the Big Jubilee Lunch, where as many people as possible will sit and eat together. A flotilla of one thousand boats will stretch seven miles along the Thames for the River Pageant. It will sail down the river from Battersea in West London to Tower Bridge in the East. The full route, including mustering and dispersal, from Hammersmith to the Greenwich Royal Naval College is around 14 miles: 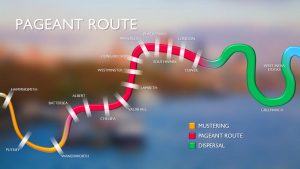 The lead herald barge will be a floating belfry (the first of its kind) with a new ring of eight bells, cast at the Whitechapel Bell Foundry. Each of ‘The Royal Jubilee Bells’ will have the Royal Arms cast on it and will be named after a senior member of the Royal Family (the 10cwt tenor bell is to be named Elizabeth).

Eight members of the Ancient Society of College Youths, led by Dickon Love, will ring a quarter peal on the river with church bells along the route providing a musical response. The riverbank towers that will be ringing are Fulham, Putney, Battersea, Chelsea, Southwark Cathedral, St Magnus the Martyr, Rotherhithe and Greenwich. Ringing at towers along the route will start at 3pm on the 3rd June and towers around the country are also encouraged to ring at this time. You can add details of your intended performances to the BellBoard diary.

The Royal Jubilee Bells will be installed later in the Church of St James, Garlickhythe, in the City of London. 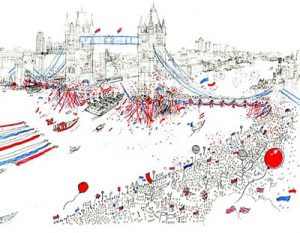 The lighting of The Queen’s 2012 Diamond Jubilee Beacons on Monday 4th June is another opportunity to ring in celebration. They will be lit by communities and individuals throughout the United Kingdom, as well as in the Channel Islands, the Isle of Man, British Overseas Territories and the Commonwealth.

The Central Council meets in Chester on Monday 4th June which by a happy coincidence is the home city of the Blue Peter winning designer of the Diamond Jubilee Emblem, ten year old Katherine Dewar. 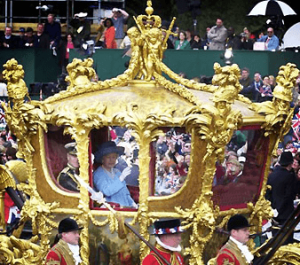 Towers nationally are invited to ring for the 10.30am Service of Thanksgiving to Celebrate Her Majesty’s Diamond Jubilee at St Paul’s Cathedral attended by HM The Queen and the Duke of Edinburgh. A special Jubilee prayer will be included in the service and the Archbishop of Canterbury will preach.

Afterwards The Queen and Duke of Edinburgh attend a reception at Mansion House and drive to Westminster Hall for a Diamond Jubilee lunch given by the Livery companies. The Royal party then travel in carriages along a Processional Route from the Palace of Westminster to Buckingham Palace with military personnel and bands lining the streets. The Queen will be joined by other members of The Royal Family on the Buckingham Palace balcony for an RAF Flypast and “Feu de Joie” salute in the forecourt.

The Queen and the Duke of Edinburgh mark the Diamond Jubilee by making a series of regional visits and engagements throughout the United Kingdom during 2012 giving many more opportunities throughout the year to ring in celebration.

Details of The River Pageant can be found via:
www.thamesdiamondjubileepageant.org
www.royaljubileebells.lovesguide.com/3pm3rd

More methods to ring for the Queen’s Diamond Jubilee